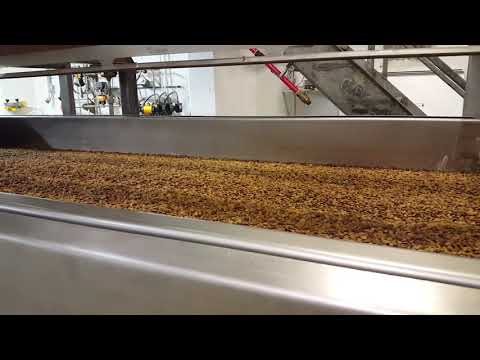 Since 1982, Triple/S Dynamics has supplied sanitary equipment to meet the highest quality standards including all stainless steel construction; bearings and other components mounted on standoffs to eliminate hard to clean crevices; hinged covers over food stream to minimize potential for cross contamination and intrusion of foreign material; and round or diamond set structural members to eliminate flat surfaces where water and debris can accumulate.

The Slipstick® Horizontal Motion Conveyor was the first horizontal motion conveyor introduced to the food industry, quickly becoming the industry standard (and seriously, every competitor has copied it). Built-to-last design has meant 20, 30 years of 24/7 production for all of the top food companies. Some of the first Slipstick Conveyors sold in the eighties are still in operation today. Now, the Slipstick is being used as an on-line accumulation system.

Applications in the Food Industry Since the 1930’s, each morning most people wake up to have a bowl of cereal for breakfast. How much cereal do we end up eating by the end of the year? The U.S. consumes about 2.7 billion boxes! This may seem like a lot but America is only ranked fourth in cereal consumption. England, Ireland, and Australia rank higher than the US.

Our partnership with cereal manufacturers around the world began in the early 1980’s. The gentle motion of the Slipstick Horizontal Motion Conveyor did not break the product, kept coatings like sugar or cinnamon on the product and didn’t leave build up on the conveyor pan.

Every major cereal company today runs their product on a Slipstick Conveyor.

The Slipstick Conveyor gently moves millions of pounds of crackers and cookies along production lines around the world.

But did you know that they are also used to accumulate product in-line to accommodate packaging machines and other on-line equipment flow. With volumes of over 1,000 cubic feet, the ability to hold product on-line means less downtime or loss of product.

It is estimated that Americans eat 20,000,000,000 (that’s Billion with the B) hot dogs/corny dogs a year, according to the National Hot Dog and Sausage Council.

Today, thousands of feet of Slipstick Sanitary Conveyors are at work accumulating and conveying the ballpark favorite at plants across this country – and chicken, bacon and sausages, too.

The sanitary dairy requirements of this industry are very stringent. Triple/S Dynamics has thousands of feet of Slipstick Sanitary Conveyors convey milk powders and infant formulas for some of the world’s largest producers every day around the world.

A customer, here for an inspection before shipping, reminded us of how our equipment plays a very important role in feeding millions of kids around the globe every day.

With today’s ever-changing food safety guidelines for pet food manufacturers, the Slipstick Sanitary Conveyor is again replacing belts in pet food and pet treat companies. A pet food maker came to us because their operators were spending too much time cleaning up the floor, the belt guard boxes and rabbit ears of their belt conveyors.

They replaced 200’ of belts with Slipstick Conveyors. After running those new Slipsticks for a year, another order was placed to add another 350’, conveying pet treats at 3,600 PPH.

What is your favorite snack? What do you munch on during football games? Is your go to potato chips, corn chips, onion rings, popcorn, pretzels, peanuts, trail mix, raisins, pork rinds, or cheese snacks? Chances are your favorite snack food is being conveyed right now on Slipstick Conveyors.